At 3936 feet above sea level, Stratton is the highest peak in the southern Green Mountains. It's also the place where James P. Taylor (no, not the singer) first envisioned what would become the Long Trail as he waited for the mist to clear back in 1910. The Long Trail is the oldest long-distance hiking trail in the United States. The LT inspired the Appalachian Trail, which runs from Georgia to Maine. 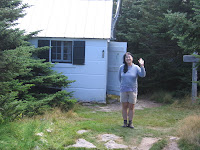 The summit of Stratton Mountain includes a fire tower and a caretaker's cabin. I had a great conversation with Jeanne (see photo), one of the caretakers. Jeanne and her husband Hugh have been at this post for eighteen years. Before that they actually worked for the U.S. Forest Service and were among the last people employed to maintain an active watch for forest fires from the tower here. Jeanne and I knew some of the same people (Jeanne says hi to Sylvia P.). 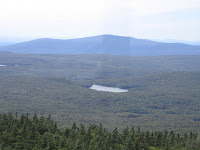 After some lunch and drying out I began the 3+ mile descent to my next camp spot at Stratton Pond (see photo with Mount Equinox in the distance).
Posted by Carl at 2:00 PM

I'm impressed Jeanne and husband have been at the post for 18 years! Sounds like a special life devoted to the wilderness. Keep up the good work, Carl!